Our Team - Board Of Directors 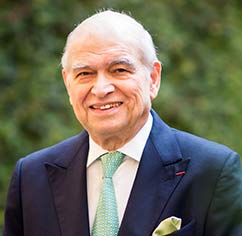 Mr. Sawhney graduated with a Master’s degree in Mechanical Sciences from Emmanuel College, University of Cambridge, U.K. and an M.B.A with distinction from the Wharton School, University of Pennsylvania, U.S.A. He was on the Dean’s list for all terms, came second in the University, and is a life member of Beta Gama Sigma.

Mr. Sawhney received the “Chevalier de la Legion d’Honneur” from President Chirac of the French Republic, and was made an ‘Honorary Lieutenant of the Royal Victorian Order’ (LVO) by HM Queen Elizabeth II. He chaired the Commonwealth Leadership Development Conferences whose objective was to broaden decision making ability of future global leaders. Mr. Sawhney is Co-Chair of the Indo-French CEO’s Forum set up by the the Prime Minister of India and President of France. He is a past Chairman of the Indian Institute of Management, Kashipur, and the Doon School, Dehradun. He was President of the All India Chess Federation for 12 years and is a Chevalier of the Confrérie des Chevaliers du Tastevin in Burgundy, France.

Mr. Sawhney was President of the Confederation of Indian Industry (CII), when India’s first wave of liberalization started in 1991. He is a Past President of the International Society of Sugar Cane Technologists, Indian Sugar Mills Association and received the Sugar Technologists’ Association of India. Mr Sawhney chairs the CII Triveni Water Institute a Centre of Excellence which develops and implements state-of-the-art tools and techniques for integrated water and waste water management beyond and within the fence for local bodies, industry and districts.

Mr. Sawhney is Chairman of Triveni Turbine Ltd. and Triveni Engineering and Industries Ltd. with a group turnover of US$ 700 million. Triveni Turbine is one of the largest global manufacturer of small steam turbines upto 30 MW with a global market share over 20%. Triveni Engineering, is one of India’s largest producers of sugar ( annual 1 million tonnes), co-generated power and ethanol, and deals with over 200,000 farmers at its seven sugar units. It is a leader in high-speed gears, and water and waste water treatment projects on a turnkey and Build Operate and Own basis.

Mr. Sawhney chairs the Board of Trustees of North India’s oldest private charitable hospital named after his great grandfather and inaugurated by the first President of India. It is funded by the Triveni Group and Sawhney family, and provides free and subsidized secondary care to the weaker sections of society in North Delhi. This 200 bed hospital also runs one of the few free nurse’s training schools in India.