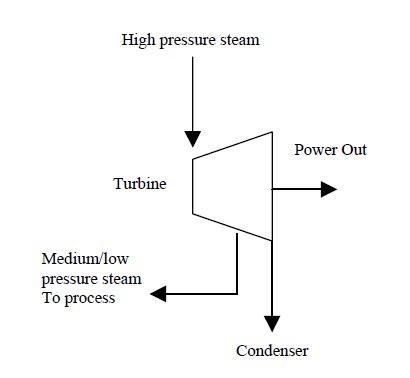 There are still a large number of back-pressure turbines in district heating schemes in eastern Europe and the CIS. Many of these are now being or have been replaced by combined-cycle plants with condensing–extraction turbines. Some of the first installations were in East Germany and Hungary. With this arrangement, all the steam can be applied to the district heating condensers during the winter months, and then in the summer, when there is less demand for heat, the turbine’s condensing tail becomes operative and the plant functions as a combined cycle.

As gas turbine development gathered pace in the 1970s, one response to the 1973
oil crisis was a growing chorus of opinion asking for the wider application of
combined heat and power schemes. Given that the efficiency of the average coalfired power station from coal to electricity was at best about 35%, critics could
easily point to the fact that, for every kilowatt hour of electricity produced, two
were wasted into the environment up the stack and into the cooling water.
Many cities in northern Europe were held up as examples of what could be done
with district heating, notably Stockholm, Västerås and Malmö in Sweden, and
Helsinki in Finland, where coverage of the city centre and the surrounding housing
areas was over 90%.
In Europe in particular, the UK, France and Italy had monolithic state-owned
utility systems whose function was to generate electricity efficiently, which was at
the lowest possible cost and securely supplied to every consumer in the land.
Outside Europe, similar arrangements existed with state-controlled utility systems
in many countries.
In the UK, for instance, any private power plant would have to be built and
operated to the same exacting standards as if it were in the public power system. In
Japan there were a number of industrial power plants, but they were not allowed to
operate in parallel with the grid. They could start up while the site was taking power
from the grid, but as soon as they got up to full power, they had to break the
connection and operate independently until they shut down.
In France, because of the large nuclear component of power supply, no combined heat and power scheme could compete on electricity costs for 9 months of
the year but, as electricity demand increased in the winter months and EdF
increased its power tariffs, then electricity from a gas-fired combined heat and
power scheme became competitive. For the industries with such schemes, running
the gas turbine reduced their electricity costs in the winter months and took the
equivalent demand off the public system. Outside this period the company would
run the fired boiler to produce steam, and electricity would be bought from the
public system.
Resistance to